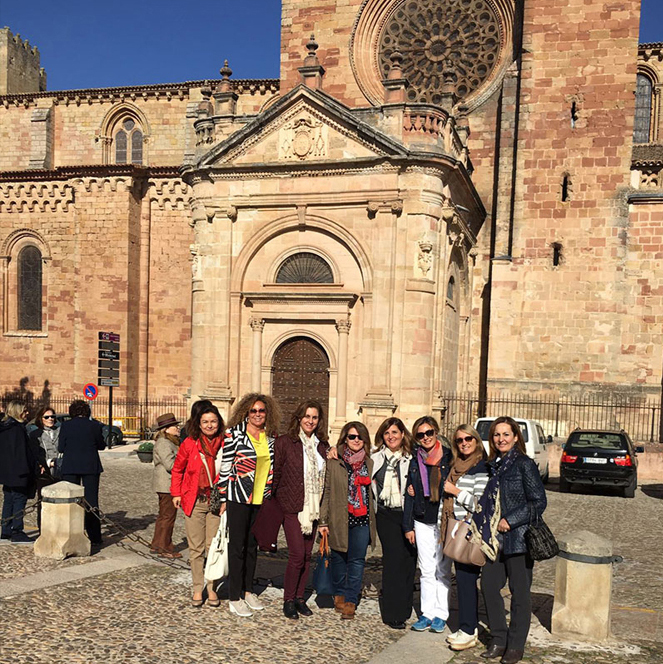 On the 2nd of November our Honorary Member Mrs Rosa Sánchez organized a visit to Sigüenza together with our friends from Damas Árabes.

Sigüenza, the city of the young Nobleman (El Doncel) is a beautiful town located in the Province of Guadalajara with an outstanding architectural heritage that was declared Historic-Artistic site in 1965.

The origins of the city go back to the Celtiberian period and reached its major brilliance in the Medieval Times after the reconquest in the 12th century by the Bishop Bernardo de Agen. Therefore, the majority of the most visited places belong to this era.

We had a guided tour to the Santa María Cathedral (patron saint of the city), which started to be built in the 12tH Century and was finished in the 16th century and beside other treasures holds the image of El Doncel (the young nobleman), the funerary sculpture famous for its perfection and realism in the figure.

We also had the opportunity to visit the “A tempora” exhibition (commemorating the 400th anniversary of Cervantes and Shakespeare’s death), the Main Square where the old market used to be, the Travesañas of the Old Town and the Alameda, a promenade next to the Henares river.

We ended our visit with lunch at Parador de Sigüenza, formerly the Bishop’s Castle, located on a hill that dominates the view of this beautiful town.